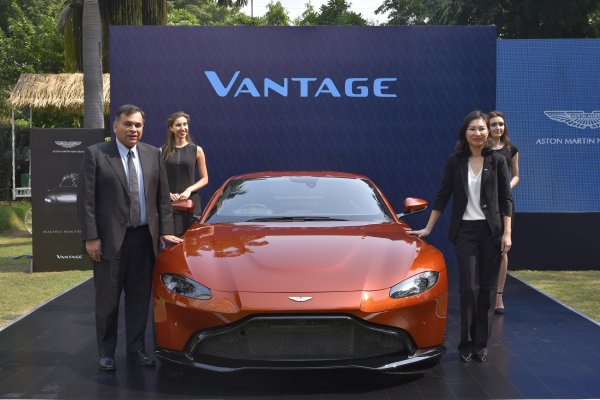 The new Aston Martin Vantage is powered by 4.0-litre, 510PS/685Nm twin-turbo V8 mated to eight-speed transmission. The potent new alloy, 4-litre twin-turbo V8 engine set low and as far back in the chassis as possible for optimal centre-of-gravity and perfect 50:50 weight distribution, denoting a high performance and high efficiency engine. Deploying its impressive power and torque to the rear wheels via a rear-mounted ZF eight-speed automatic transmission, the archetypal hunter is capable of accelerating from 0 to 100km/h in 3.6 seconds and on to a maximum speed of 195mph, employing a sophisticated suite of integrated electronic systems to offer maximum control and driver enjoyment.

On the design front, the new Vantage’s sculptural forms create an athletic, predatory stance, while the minimal front and rear overhangs, muscular flanks and broad haunches express the agility and dynamism inherent with the car. Its new head and tail lights form dramatic new signatures, giving the Vantage unmistakable road presence and contribute to a strong, individual identity.

Aerodynamic performance was central to the Vantage design concept: the front splitter directs airflow underneath the car, where a system of fences channels cooling air where it is needed, and also ensures the rear diffuser is fed with clean airflow. The design of the diffuser creates an area of low pressure air, while simultaneously preventing turbulence generated by the rear wheels from disrupting the flow of air exiting centrally from beneath the car.

Together with the new side gills, which have been integrated into the body surface and bleed air pressure out from the wheel arches, and the pronounced upswept rear deck lid, the Vantage generates a significant level of downforce – a rarity on any production car and a first for a core production Aston Martin model.

Its cockpi has a high waist interior theme and lower driving position creates a more immersive driving experience, and contributes to significant gains in occupant space and significant improvement in headroom compared with the outgoing Vantage.

For the first time on an Aston Martin, the new Vantage also features an Electronic Rear Differential (E-Diff). This differential is linked to the car’s electronic stability control system, so it can understand the car’s behaviour, and react accordingly to direct the engine’s power to the relevant wheel. At higher speeds, the E-Diff’s speed and sensitivity of response enables the system to take very fine control of the car’s dynamic behaviour. It makes the car feel much more composed both in terms of its straight-line stability and its cornering performance, providing the driver with increased levels of confidence to explore and enjoy the car’s capabilities to the fullest.

The chassis is an evolution of the latest generation bonded aluminium structure first seen on the DB11, though some 70% of the structure’s new components are new for Vantage. Balance, strength, rigidity and weight efficiency were all priorities in the new Vantage design, as was handling purity and consistency.

The new Vantage will be available for viewing in the showroom in India.