LG has announced availability of its premium smartphone, the LG G7+ ThinQ with Artificial Intelligence features in India. This phone comes with 6GB LPDDR4x RAM and 128GB UFS 2.1 ROM extendable to 2TB via MicroSD card. This phone is powered by Qualcomm Snapdragon 845 Mobile Platform with Adreno 630 GPU. Priced at Rs. 39,990, this phone will be available via Flipkart from 10th August in two colors of New Platinum Gray and New Aurora Black. 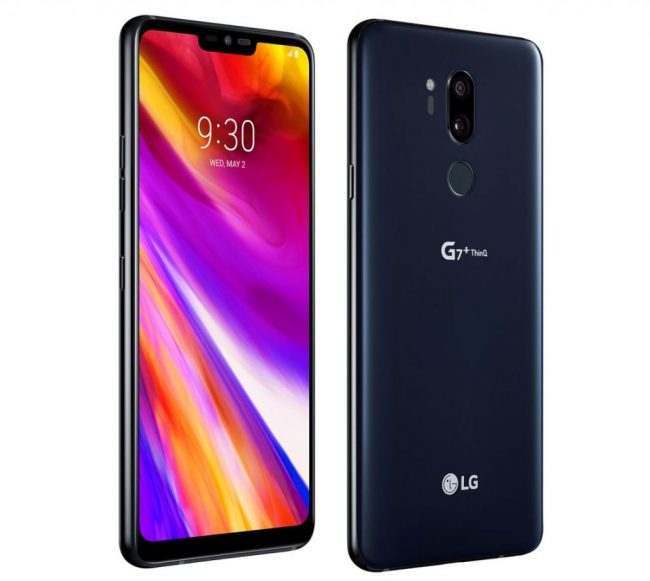 In the camera department, the LG G7 ThinQ is mounted with an 8MP front camera and 16MP Dual lenses on the back in both standard and Super Wide Angle configurations. LG has also enhanced the AI features of the camera that first debuted in the LG V30S ThinQ. AI camera on G7+ ThinQ now offers 19 shooting modes, up from eight, for even more intelligence-optimized shots. Besides this, Live Photo mode records one second before and after the shutter is pressed for snippets of unexpected moments or expressions that would normally be missed. Stickers uses face recognition to generate fun 2D and 3D overlays such as sunglasses and headbands that can be viewed directly on the display. The Portrait Mode generates professional looking shots with out-of-focus backgrounds. This bokeh effect can be generated using either the standard or Super Wide Angle lens.

This phone will be one of the first devices to get upcoming Google Lens features for delivering more information on objects such as landmarks, plants, animals, books as well as identify text. Located just below the volume is a button that launches the phone’s AI functions. A single tap of this button will launch the Google Assistant while two quick taps will launch Google Lens, a first on any phone. Users can also hold down the button to start talking to the Google Assistant.

LG G7+ ThinQ sports a 6.1-inch QHD+ (3120 x 1440) display sporting a 19.5:9 FullVision screen ratio and a bottom bezel which is almost 50 percent slimmer than on the LG G6. Its new Second Screen gives users flexible options to set up the display to fit your tastes and style and can be fully expanded for a bezel-less look.

On the audio front, this phone is packed with Boombox Speaker for enriched audio experience. It is also the first smartphone to offer DTS:X to deliver virtual 3D sound for all content, up to 7.1 channel audio with earphones. It is also equipped with a Hi-Fi Quad DAC for incredibly rich sound especially when paired with high-impedance earphones.