Microsoft is coming to the rescue of Indian farmers. To enable farmers use technology to improve farm yields, Microsoft and drone maker DJI are partnering to make it easier and more affordable for farmers to quickly get the information related to soil moisture in their fields and any pest infestation, which would help them make crucial decisions related to sowing and pesticides application as stated by Microsoft in its press statement. 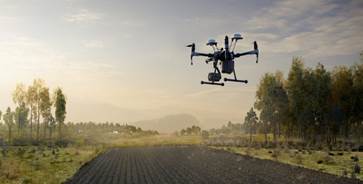 According to Microsoft, by the year 2050, the current world population of 7.6 billion is expected to reach 9.8 billion. Food production will have to increase to keep up with that growth, however, there is limited amount of additional arable land available for farming. In India, current farm yields are lower than world average, and several activities are being taken up to improve farm yields.

Microsoft has further stated that DJI’s drones provide real-time generation of aerial images, which are used by Microsoft’s machine learning algorithms on the Azure IoT Edge to create detailed heatmaps. The maps are transmitted using TV white space (TV white spaces are unused TV broadcast spectrum, which is plentiful in rural areas where standard internet connections are often patchy) technology to the Azure IoT edge device located on the farm. These heatmaps enable farmers with everything, including whether the soil temperature is ripe for seed germination, and on quickly identifying crop stress and disease that may reduce yield.

Through this technology, hours and days spent walking or driving on the fields to assess soil situation and to detect problems gets eliminated, and enables farmers to use their resources – water, land, fertilizer – optimally. This will lead to increase in yields, farmers will be able to grow more crops and farm incomes will improve.

In India, Microsoft in collaboration with ICRISAT is using technologies like Artificial Intelligence (AI), Cloud Machine Learning, satellite images and advanced analytics to empower small-holder farmers to increase their income through higher crop yield and greater price realization. Under this program with farmers in Andhra Pradesh, farmers received text messages on sowing advisories such as sowing date, land preparation, soil test based fertilizer application, among others.

“Sowing date as such is very critical to ensure that farmers harvest a good crop. And if it fails, it results in loss as a lot of costs are incurred for seeds, as well as the fertilizer applications,” according to Dr. Suhas P. Wani, Director, Asia Region, Asia Region, of the International Crop Research Institute for the Semi-Arid Tropics (ICRISAT).

To use this technology, the farmers just need is a feature phone capable of receiving text messages. AI-based sowing advisories has lead to 30% higher yields for these farmers as claimed by Microsoft.