As mentioned by me in my earlier post that Honor View 10 is going to be smash hit; this prediction of mine has come true. Honor View 10 with Artificial Intelligence features which went on sale in India on 8th January has clocked 5X (five times) sale compared to its predecessor, Honor 8 Pro first sale as announced by Honor. Credit for success of this phone goes to its intelligent AI features, best in class camera capabilities and super-fast software performance. 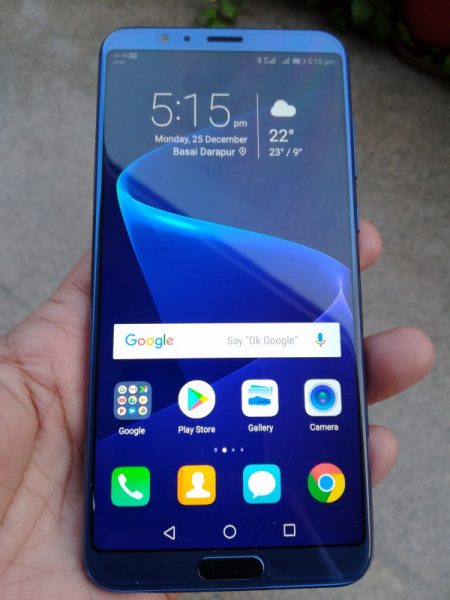 “We are humbled by the response shown by Indian consumers for Honor View 10 and would like to thank them for the support. Honor View 10 has reshaped the flagship smartphone market with its most advanced hardware, at a highly competitive price point and will be instrumental in reiterating Honor’s commitment as an innovative smartphone brand in India. As a young brand, we take pride in delivering only the highest quality cutting edge technologies at value for money pricing.” Said Mr. P Sanjeev, Vice President, Sales, Huawei Consumer Business Group.

The Honor View 10 is powered by advanced mobile chipset Kirin 970 with smart AI capabilities which include Facial Unlock, 3D face reconstruction, image and voice to text translation, intelligent scene and object recognition and motion detection in its camera settings.

On the specifications front, the Honor View 10 sports a 5.99-inch (2160 x 1080 pixels) Full HD+ display with a 2.5D curved glass on top. It has narrow bezels and comes with aspect ratio of 18:9. This phone is powered by Huawei’s own HiSilicon Kirin 970 with four Cortex-A73 cores clocked at 2.36GHz, four Cortex-A53 cores clocked at 1.8GHz, and an i7 co-processor with built-in Neural Processing Unit for AI eco-system. It comes with 6GB RAM and 128GB of internal storage which is expandable up to 256GB with microSD. This phone is packed with 3750mAh battery with fast charging.

On the imaging front, this phone is mounted with two rear cameras – 16MP (RGB) + 20MP (Monochrome) equipped with f/1.8 aperture, LED flash, PDAF and 4K video recording capability. For selfies, it has 13MP front-facing camera with f/2.0 aperture. You can get Bokeh effect both on rear and selfie cameras.

This phone has home button on the front and fingerprint sensor is embedded on it. It also has face unlock feature which hides the content from the strangers. It offers connectivity options of 4G VoLTE, WiFi 802.11ac, Bluetooth 4.2 LE, GPS, USB Type-C and NFC. It runs on Android 8.0 Oreo with Emotion UI 8.0 on top.

Priced at Rs. 29,999, Honor View 10 comes in Navy Blue and Midnight Black Colors. It is available exclusively on Amazon.in