Isuzu Motors Rolls out 10,000th Vehicle from its Plant in Andhra Pradesh

Isuzu Motors has rolled out the 10,000th vehicle from its factory located in SriCity, Andhra Pradesh. The company rolled-out a ISUZU D-MAX V-Cross from its assembly line. This plant became operational in April 2016 and has been producing ISUZU D-MAX V-Cross – India’s First Adventure Utility Vehicle, ISUZU mu-X, a 7-seater, full-size family SUV in the personal segment and ISUZU D-MAX S-CAB and Regular Cab models for the commercial segment. 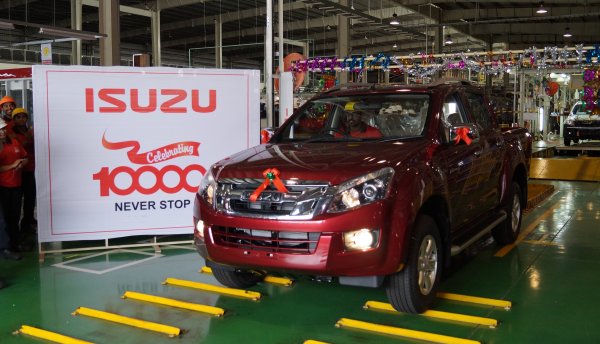 Isuzu Motors India has announced that it has crossed the cumulative sale of 10,000 units in March 2018 which includes the models that were manufactured at Hindustan Motors facility near Chennai till early 2016.

The SriCity plant was inaugurated by the Hon’ble Chief Minister of Andhra Pradesh, Shri. Nara Chandrababu Naidu in April 2016 and the company rolled out the first V-Cross, marking the commencement of its manufacturing operations in India. The plant is one of the key manufacturing hubs for ISUZU, globally and has already begun exports to neighbouring countries of Nepal and Bhutan. The plant follows the highly regarded ‘Isuzu Manufacturing Management’ philosophy which translates into delivering quality across all products.

Commenting on the milestone, Mr. Naohiro Yamaguchi, Managing Director, Isuzu Motors India, said, “The roll-out of the 10,000th vehicle from SriCity marks an important milestone in the journey of ISUZU in India. It is a testimony to show our commitment to India and the trust Indian customers have built on us and our products. It is just the beginning and we will continue to remain focussed on our core objectives of delivering value and quality through our products.”