Kia Motors is the new entrant to India’s congested automobile market and is launching its first SUV on 22nd August named as Kia Seltos. Kia has come to the Indian market when atmosphere is dismissal as far as sales are concerned but thankfully Kia has got very good response when they opened booking well in advance for Seltos and till date more than 23000 booking have been received by the company. Seltos will give tough competition to the recenly launched MG Hector and Hyndai’s Creta. I have the opportunity to drive Seltos both manual and automatic versions in Goa in wet weather and to be frank, it was a unique experience to test the Seltos and experience its multitude of features and negotiate the vehicle when it was raining heavily. I really liked this experience and why so? Read below:

Let us start with the design of Seltos. You will have love at first sight feeling when you see this vehicle for the first time. It is not an ordinary vehicle but different from the others. The Seltos comes in two trims of Tech Line and GT Line. The latter has sporty look and comes with red pinstripping on the body. We have observed that red accents does not look as distinct in certain dark body shades for instance on the red. On the front, both the trims have signature Tiger Nose grille with diamond shape knurling on front grille, LED headlights appropriately named Crown Jewel by Kia which are very efffective and LED DRLs which are also interestingly called Heartbeat DRLs as they give you the same feeling. The front also has vertical fog lamps which are called Ice Cube Led Lamps. Both the trims come with 17 inch alloys and the premium crystal cut alloys on GT Line with red-painted brake callipers which are eye-catching and compliment the dimension of the Seltos. 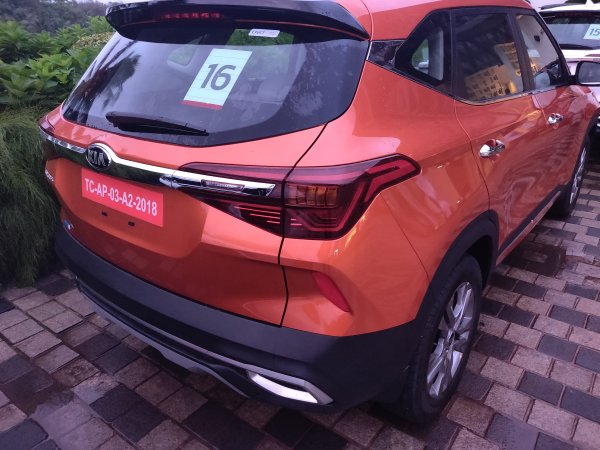 On the back, their is chrome plate that bridges with extended tail lamps whch gives an elegant look. The rear of Seltos also looks impressive with these embellishments. 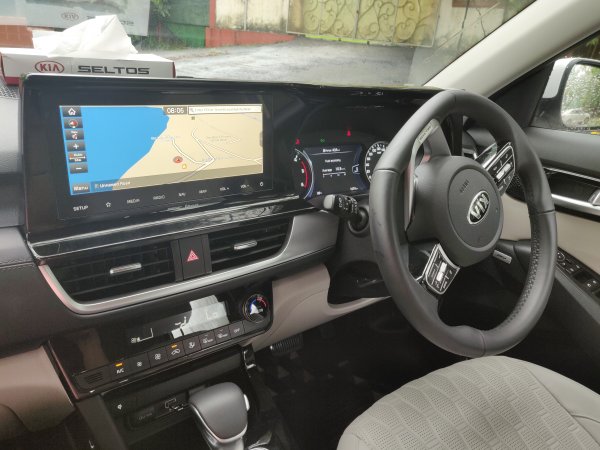 The moment you enter the Seltos, you will be mesmerized by its cockpit design as you will be greeted with 10.25 inch touchscreen with lot of features for entertainment, in-built navigation system which worked very efficiently during my test drive. Adjoining to the touchscree is instrument console having digital display of 7 inch which is also appealng and comes with host of features. Seltos comes with load of features and some of them are segment first and not found on other cars in India such as 8-inch heads up display on GT Line which shows speed, navigation etc. The infotainment systems is packed with 8 Bose speakers with ambient lighting to create a party atmosphere when you play music. Other features are air purifier, inbuilt perfume diffuser which can be controlled via intutivtive touchscreen and ac vents in the rear of middle of front seats for proper cooling to the passengers sitting in the back seats and many more. Both the GT Line and Tech Line come with beige/black and all-black upholstery which looks quite impressive. Moreover, you get sufficient headroom and enough space in the front and back for your legs and easily five adults can be accomodated in this vehicle- two in the front and three in the back. For storing your luggage, you get boot of large boot of 433 litres. 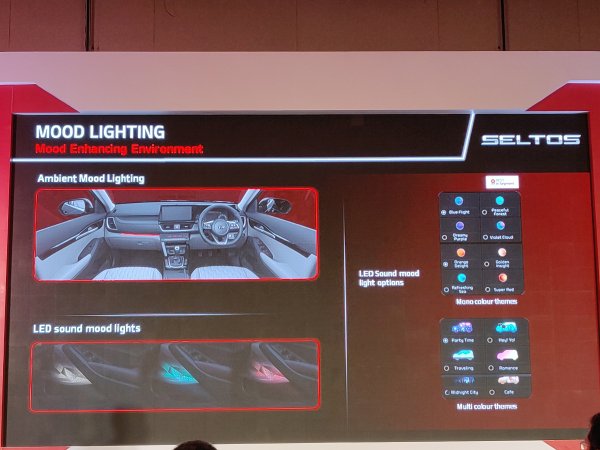 Other very useful feature on Seltos is UVO which means Your Voice, connected app which has 37 features and some of them are navigation by voice command, remote engine start/ stop, door lock/ unlock, and remote vehicle status. This app can be paired with your smartphone. To test this app, we were given paired smartphones as this app will be released officially on 22nd August. This app worked most of the time but when it rained heavily in Goa, it was not replying to voice commands; probably this was due to bad weather.

Seltos take care very well all aspects of safety. It comes wtih 6-airbags, ABS with EBD, Brake Assist, Hill Start Assist, rear and front parking sensors. Another important feature on GT Line is segment first 360 degree camera with Blind View Monitor and driving rear view monitor and is qite useful when you push indicator for left or right turn. It activates the camera of left or right and shows the exact view of respective sides on the instrument console to be careful while turning.

The Seltos will be available in 16 variants which to my opinion looks quite confusing. It will come with Petrol and Diesel engines which are Bharat VI compliant. The Petrol engine comes in two variants – 1.5-litre petrol engine which churns out 115 PS and 144 Nm of torque and is mated with 6-speed manual or automatic gearbox. The second variant comes with 1.4-litre turbo petrol having 140 PS and 242 Nm of torque and is mated to 6-speed manual or a 7-speed dual clutch transmission. The 1.5-litre diesel engine comes with 115 PS and 250 Nm of torque which has 6-speed manual gearbox or alternatively 6 speed automatic. The fuel efficiency claimed by the company is 16kmpl for 6-speed automatic and 21kmpl for 6-speed manual looks impressive by any standard. I have driven manual petrol and automatice diesel variants. 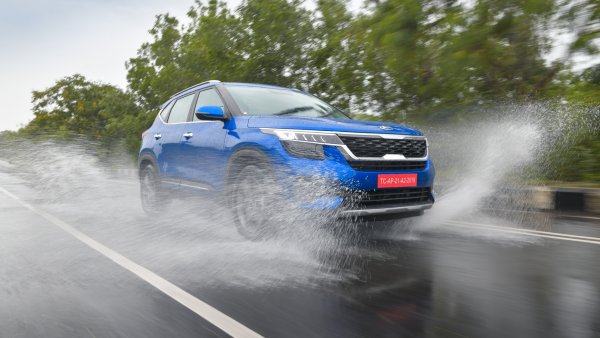 While driving manual, I observed that gear shifts smoothly and acceleration is very good. Same can be said of automatic variant as normally I have observed that acceleration from start is nor normally smmoth but in Seltos I have found that it has great pick-up. Even in wet and narrow lanes of Goa, manoverurability was very good and on higways driving at speed of 100 on wet road was complete fun. Breaking system of both the variants is excellent. The steering of both the variants are well-balanced and easy to operate. The diesel Seltos does not create much sound and its sound does not enter the cabin at all. To make driving easy, it also comes with three drive modes of Normal, Eco and Sport. The suspension of petrol and diesel variants is well balanced and even driving on some broken Goan roads and stormy lanes, I was not jolted even slightly and this feature will be quite useful as we have similar road conditions throughout India.

Kia Seltos brings to the table everthing a customer wants nowadays. It has stylish exterior and interior. It has multitude of variants to choose from in eight monotone and five dual-tone colour options. This SUV is connected car and comes with many segment first features. It provides great driving experience in all vairants with emphasis on safety. This SUV will be officially launched on 22nd August when the prices will be revealed. It is expected to start at a price of Rs. 11 lakhs. Stay tuned for pricing details on 22nd August.