MediaTek today announced its mid-range Helio G90 series chipsets comprising of Helio G90 & G90T for smartphone gaming experience. This series of chipsets are claimed to be 10 percent faster than Snapdragon 730 chipset. On this occasion, Manu Kumar Jain, CEO of Xiaomi India announced that Xiaomi will launch shortly a smartphone powered by Helio G90T. 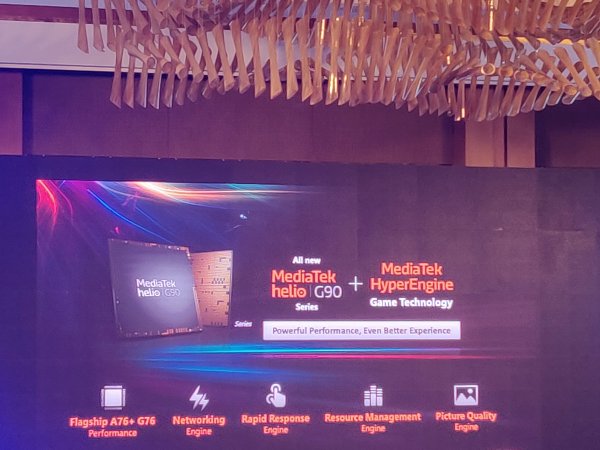 The Helio G90 Series combines the latest CPU and GPU cores with ultra-fast memory and massive AI performance to deliver fast, fluid action. The MediaTek Helio G90 series is paired with MediaTek’s HyperEngine game technology for the greatest gaming experience on a smartphone.

The Helio G90 series octa-core chipsets use Arm Cortex-A76 and Cortex-A55’s paired with the Arm Mali – G76 3EEMC4 with speeds of up to 800MHz. The combination of CPU, GPU and APU delivers up to 1TMACs performance, for peak power and smooth game play as claimed by MediaTek.

“The mobile gaming market is growing and device makers are looking to give consumers and especially gaming fans the best smartphone game-play experience. That’s why we designed the G90 series,” said TL Lee, General Manager of MediaTek’s Wireless Communication business unit. “Our combination of hardware and software delivers high performance, unrivaled image quality, uninterrupted connectivity to always stay in the game, and smooth responsive action even in the most demanding games.”

“With the Helio G90 series you get a super fast and responsive display and reduced lag for smoother game play – because every millisecond counts in the game world,” said Lee. “Whether it’s Fortnite, PUBG or other top titles, this chip is a gaming powerhouse.”

The new G90 series comes with upto 10GB of LPDDR4x and up to 2133MHz memory. A large L3 cache and speeds of up to 2.05GHz can noticeably boost speeds in demanding games and apps.

• Networking Engine: Intelligent network prediction optimizes the connection between smartphone and cellular network. If it detects the Wi-Fi signal degrading, it triggers Wi-Fi and LTE concurrency that takes just milliseconds. This seamless exchange from one connection to the other keeps the network connection smooth and the game lag-free. Even with a crowded network you’ll get up to a 50% faster response than competing solutions.

• Call & Data Concurrency so when your smartphone receives a call it won’t drop the data connection. You can defer a call without leaving the game. The data connection remains live and the game server connection never drops, not even for a millisecond.