OnePlus has scheduled an event in NewYork and New Delhi same time on 30th October to launch OnePlus 6T, which is an upgraded version of OnePlus 6 which was introduced in India in the month of April this year. In India, launch event will take place at the KDJW Stadium, inside Indira Gandhi Sports Complex, New Delhi at 8:30 pm on 30th October 2018. 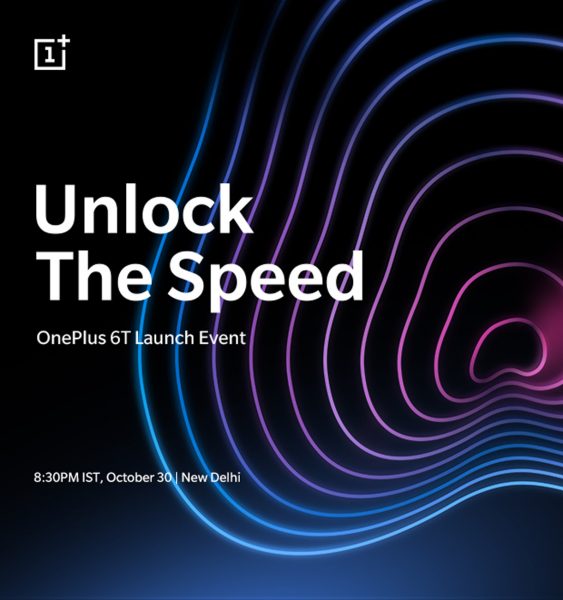 Those desirous of attending launch event will have to shell out Rs. 999. Launch event invitation vouchers will go on sale on October 17 at 10:00AM IST on oneplus.in

According to OnePlus, those attendees who purchase invitation vouches will receive a selection of exclusive gifts worth several times the value of admission. Plus they will hve the advantage of expriencing the new phone at the OnePlus Experience Zone.

OnePlus has already confirmed that upcoming OnePlus 6T will incorporate in-display fingerprint sensor which we have seen on the latest Vivo smartphones. The 6T will also not feature 3.5mm headphone jack and users will have to use Bluetooth or USB Type-C for audio connectivity.

As per media reports and speculations, OnePlus 6T will come with Waterdrop Notch display which we have seen on Oppo F9 series and Vivo V11 Pro. The 6T is also expected to get boost in battery and may be packed with 3700mAh battery with Dash Charge. The 6T cameras are also speculated to be tweaked and for selfie, it is expected to have 20MP sensor instead of 16MP which was on OnePlus 6 and rear cameras set-up is expected to remain the same. OnePlus 6T will be powered by the latest Snapdragon 845 processor mated with 6GB/8GB RAM and storage variants of 64/128/256GB.

We shall be covering the launch event on 30th October and stay tuned for more details and videos!