At an event in NewYork, OnePlus has launched today OnePlus 6T which is an upgraded version of OnePlus 6. The OnePlus 6T comes with an optical in-display fingerprint sensor, 3700mAh battery but without 3.5mm headphone jack and few software tweaks. 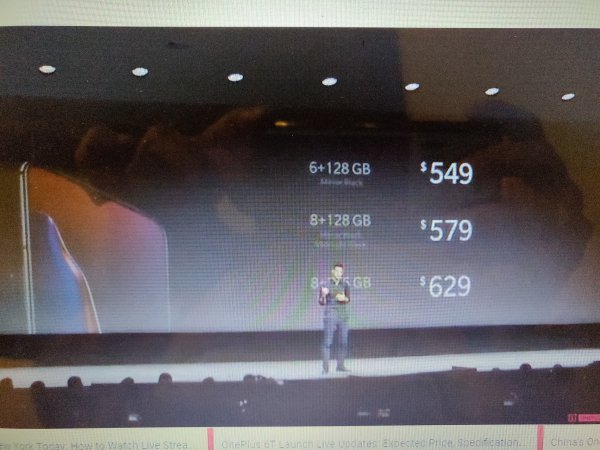 The 6T comes in two colors of Midnight Black, Mirror Black and the price starts at USD 549 for 6GB RAM + 128GB ROM, USD 579 for 8GB RAM+128GB ROM and USD 629 for 8GB RAM+256GB ROM. India launch will take place tomorrow night in New Delhi when Indian prices will be announced . It will go on sale in India from 2nd November on Amazon.in.

It sports a 6.4-inch (1080×2340 pixels) AMOLED display with 19.5:9 aspect ratio with very small notch. It has same processor of OnePlus 6. The 6T is powered by 2.8GHz Octa-Core Qualcomm Snapdragon 845 processor with Adreno 630 GPU for very fast performance. It comes with options of 6GB/8GB RAM with storage options of 128GB/256GB. This is Dual SIM phone but does not have microSD card slot and hence internal storage cannot be extended. This phone is packed with 3700mAh battery with Dash Charge for fast charging.

On the imaging front, the 6T is armed with same 16 megapixel primary sensor with f/1.7 aperture with Optical and Electronic Image Stabilisation and 20 megapixel secondary sensor with f/1.7 aperture and LED flash. For low light photography, new Nightscape Mode has been introduced. At the front, it has 16MP selfie camera with Sony IMX 371 sensor, f/2.0 aperture with Face Unlock feature. OnePlus has not tinkered with front camera and the same camera of OnePlus 6 has been provided on 6T.

What is main difference between OnePlus 6 and OnePlus 6T

Battery : Compared to 3300mAh battery on OnePlus 6, the 6T has been equipped with 3700mAh battery with Dash Charge.

The new 6T runs on Oxygen OS based on Android P with new features of Smooth Navigation Gesture 2.0.