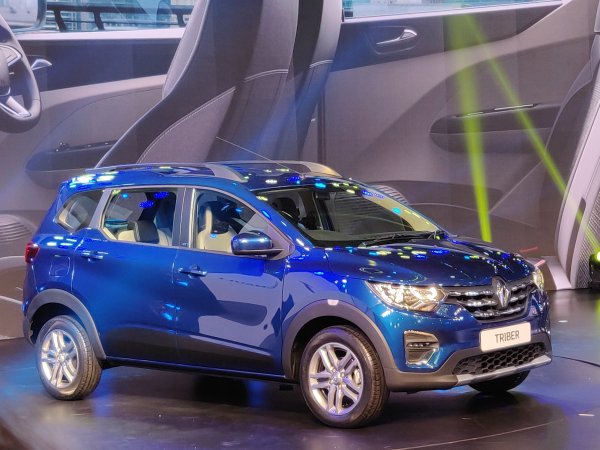 Renault Triber design is unique, modern and attractive, combining dynamism and sturdiness in its less-than-four-meter length while offering best level roominess. Its
front-bumper is very sturdy and suggests a greater capacity to cope with the most difficult roads. Ground clearance of 182 mm reinforces the impression of robustness, as do other features such as the sculpted bonnet, front and rear SUV skid plates, roof bars, and black plastic wheel arch protections and lower protective door panels, giving the vehicle an adventurous look. 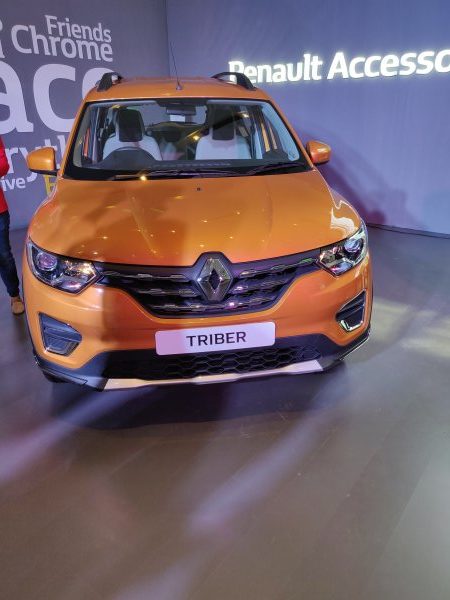 The Triber has a contemporary and sophisticated front-end that includes signature Renault design features such as LED daytime running lights circled in chrome and black headlamp masks. The Renault logo is highlighted on a Triple Edge Chrome front grille which extends to the projector headlamps. The two-part rear Eagle beak tail lamps extend onto the outside of the wings and taper to point to the center of the tailgate, making the vehicle seem wider.

The interiors of the Triber has two-tone colors, from deep black for the upper part of the dashboard to a beige and white tone for the lower part and door trims. The chrome trim on air vents, air-conditioning dials, the start/stop button, silver accents on the dashboard and the feel of the silver door handle and door armrests covered with pleasant-to-the-touch fabric, add to the overall visual appeal of the car.

To ensure passenger comfort, a refrigerated central storage area and cup holders are accessible to everyone between the first and second seats. In addition to the lower glove compartment, which is also refrigerated, there is an upper glove compartment with a capacity of more than 4 liters. The Triber features the best level of storage compartment of upto 31 liters, more than double of what is usually available on similar-size hatchbacks.

The Triber has 8 inch multimedia touch screen and is compatible with Android Auto and Apple CarPlay. The multimedia system also allows videos to be played through USB plug.

With the convenient hands-free card, doors can be opened and closed and the engine started with a smart start stop button, without making any physical contact with the key. The sensors in the card mean that the doors can be locked and unlocked without having to take the card out of a pocket or bag or pressing a button. The hands-free system includes an auto-lock function when drivers walk away from the vehicle.

The Triber comes with twin Air conditioning system ensuring cooling comfort across the rows. The second row customers get dedicated vents on Center pillars and the third row has specific air vents located on the ceiling. Everyone gets the option to adjust the air flow as they wish.

The Triber offers sliding, reclinable, foldable and tumble second-row seats along with the large door opening angles (74° on rear doors) which provide the best level ingress and egress of its segment. The industry first EasyFix seats allows for easy handling and removal of third-row independent seats. It offers different seat modes such as Life Mode, Tribe Mode, Surfing Mode and Camping Mode.

Renault Triber is fitted with a 1.0-liter 3-cylinder petrol energy engine generating 72Ps with 96Nm torque. It can be paired with five-speed manual transmission or five speed EASY-R AMT.

For safety, the Tribe comes with 3-point belts in all rows, with those in rows 1 and side seats in row 2 equipped with a retractor. The driver’s belt is also equipped with a pretensioner and load limiter. Renault Triber is fitted with 4 airbags: driver, passenger, and front sides.

The price of Triber will be announced next month and it will go on sale later this year.

KTM has announced the launch of KTM 250 Adventure today at Rs. 2,48,256 (Ex-showroom Delhi). Bookings for this adventurous motorcycle has commenced...
Read more
Automobile

Tata Motors has announced the launch of the XM+ variant of its premium hatchback – the Tata Altroz. The Altroz XM+ variant...
Read more
Automobile

Royal Enfield has today launched its all-new Easy Cruiser, the Royal Enfield Meteor 350. The Meteor 350 will be available at a...
Read more
Automobile