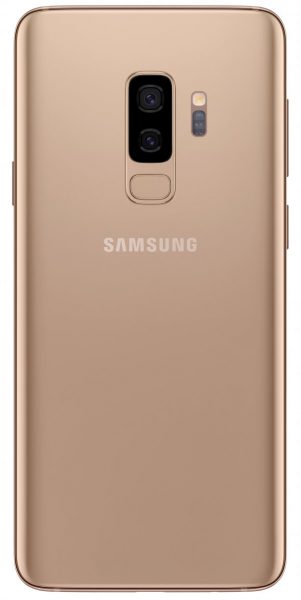 Launched in March 2018, Samsung Galaxy S9+ is also available in Midnight Black, Coral Blue, and Lilac Purple colors. Sunrise Gold variant is a limited edition offering and will be available at Rs.68,900. Samsung is offering a special one-time screen replacement offer and Rs.9000 cashback when customers pay using Paytm Mall or ICICI Bank credit cards. It will be available across selected retail stores from June 20th 2018. Customers looking to buy this variant online will have the option to pre-book the device starting June 15th 2018 on Samsung Shop and Flipkart.

The Sunrise Gold edition of Galaxy S9+ is Samsung’s first device to feature a satin gloss finish which wraps the smartphone in an elegant glow and glimmer.

Samsung has also announced a TV Control widget, which offers a one-of-its-kind unified convergence solution between mobiles and televisions. Once enabled through Smart Things app, when a user is in the vicinity of a television, the TV Control widget will automatically show up on their phone and allow two-way screen mirroring and sound mirroring.

The TV Control widget also has a ‘Play Sound’ mode which allows consumers to stream and share music from their mobile with others around by using the television as a Bluetooth speaker using the “Device to TV” option. Reverse sound mirroring using the ‘TV to device’ option turns social entertainment to personal entertainment. So, consumers can listen to TV sound on mobile earphones at night without disturbing others.

On the specifications front, the Galaxy S9+ flaunts a 6.2-inch Quad HD+ curved display with an aspect ratio of 18:5:9 (Infinity Display) with 529ppi. It is powered by an Octa-Core Samsung Exynos 9 Series 9810 processor with Mali G72MP18 GPU. It comes with 6GB LPDDR4x RAM with 128GB of internal storage which can be further extended upto 400GB via microSD card.

The S9+ has 12MP telephoto and 12MP wide-angle lenses with f/2.4 and f/1.5 apertures with features of live focus for bokeh effect with background blur. According to Samsung, the camera will select automatically f/1.5 aperture when it’s dark and less light and f/2.4 when it’s too bright for crisp and clear photos. For selfies, it has 8MP AF front camera with f/1.7 aperture.

This phone is packed with stereo speakers tuned by AKG and support Dolby Atmos, giving an immersive 360-degree sound effect. For security, this phone has features of iris, fingerprint scanning and facial recognition This phone is IP68 water and dust resistance and also comes with fast wired and wireless charging capabilities.