The most anticipated next iteration of Google phones have been launched at an event in NewYork. The newly launched Google Pixel 3 and Pixel 3 XL differs only in display, battery capacity and rest of the features are same in both the phones. 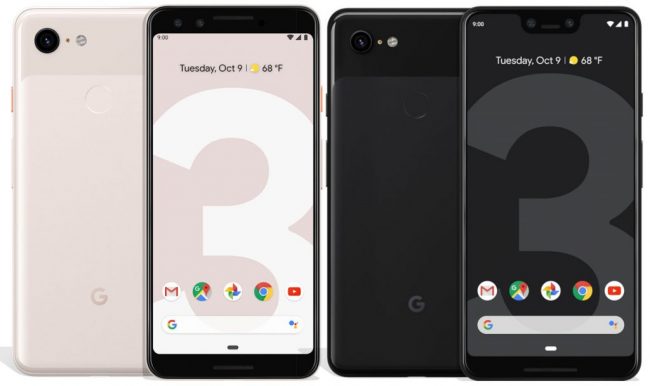 On the photography front, both the phones have same cameras on the front and back. Both the phones are armed with 12.2MP rear camera with LED flash, f/1.8 aperture, 76 degree field of view, Dual Pixel auto focus, OIS, EIS and 4K video recording. In the front, these phones are equipped with two cameras – 8MP with f/1.8 aperture, 75 degree Field of View and secondary 8MP fixed focus camera with f/2.2 aperture and 97 degree of Field of View.

These cameras come with various features such as Top Shot which uses AI to help you capture the perfect photo. When you take a photo, it analyzes the images just before and just after you press the shutter, looking for those where everyone is smiling, with eyes open, and facing the camera. If there is a better shot, the camera will give you the option to save it. Super Res Zoom on the camera produces sharp details even when zooming into the subject. With Night Sight feature, the camera is capable of taking natural-looking photos in dark surroundings also. For selfies, the front cameras provide 184% more room for capturing brighter Group Selfies. Photobooth mode uses AI to recognize when you are smiling or making a funny expression and it will snap the photo on its own and you need not to reach for the shutter button. For taking photos in Portrait Mode, you can change the blurriness of the background, or change the part of the picture in focus even after you have taken it. Pixel 3 also brings you Color Pop so that you can make the subject of your photo stand out, in color, while the background is changed to black and white.

These phones also incorporate feature of Digital Wellbeing which includes a dashboard to help you understand how you spend time on your phone, the ability to set time limits on specific apps, and a new Wind Down mode to help you get to sleep at night which turns your display to a grayscale screen.

The Pixel 3 is packed with 2915mAh battery and Pixel 3 XL has 3430mAh battery with 18 Watt fast charger in the box, which can give you seven hours of use in 15 minutes of charge. Google has also introduced Pixel Stand which is Qi compliant wireless charger (sold separately at Rs. 6,900). While charging in the Pixel Stand, your phone turns into a smart speaker and smart display powered by the Google Assistant, a photo frame, a control panel for your smart home.

Pixel 3 is IP68 water and dust resistant and has a security chip custom-designed by Google called Titan M, making it the most secure phone. Titan M protects your unlock credentials, disk encryption, app data, and the integrity of the operating system code itself. Both the phones run the latest Android 9 Pie.

Both the phones come with Pixel USB-C earbuds and a USB-C Digital to 3.5 mm headphone adapter in the box. Pixel 3 comes with dual front-firing speakers.

Both the phones have Pixel’s iconic two-tone design of aluminium frame and a soft-touch glass back. These phones come in three colors – Just Black, Clearly White, and Not Pink. In India, they are priced as follows:

Pre-orders for these phone will start from 11th October on Flipkart, Airtel’s online store, and at offline stores including Reliance Digital, Croma and other leading stores across India. Pixel 3 and Pixel 3 XL will be available for sale both online and in retail stores from 1st November.