HMD Global has announced mid-range Nokia 8.1, Android One smartphone, which is global variant of the Nokia X7 that was launched in China in the month of October. This phone comes in three colour combinations – Blue/Silver, Steel/Copper, Iron/Steel, and will start selling starting from mid-December and is priced EURO 399. This phone will be launched in India on 10th December and is expected to start selling in India also in mid-December. 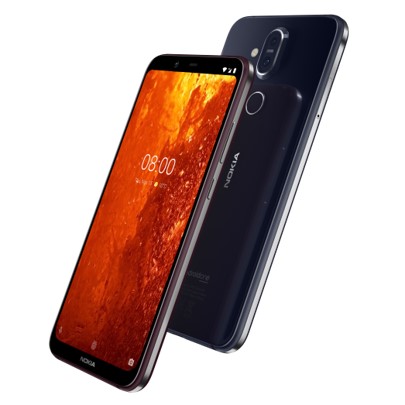 The Nokia 8.1 has USP of PureDisplay which has HDR10 support, Dual rear camera setup with Zeiss optics, Snapdragon 710 SoC. This is the first Nokia smartphone to launch with Android 9 Pie out of the box and part of Android One which offers great storage and battery life right out of the box and comes with three years of monthly security patches and two major OS updates.

This phone flaunts a 6.18 inch full-HD+ (1080×2244 pixels) edge-to-edge Puredisplay. The display has 18.7:9 aspect ratio and protection of Corning Gorilla Glass 3. This phone is powered by Snapdragon 710 octa-core processor clocked up to 2.2GHz with Adreno 616 GPU. It comes with 4GB (LPPDDR4x) RAM and 64GB of internal storage which can be extended up to 400GB with microSD card. This phone is packed with 3500mAh battery with support for 18W fast charging.

On the imaging front, the Nokia 8.1 has two primary cameras which comes with Zeiss optics. The primary 12MP camera comes with 1/2.55” super sensitive sensor with large 1.4 micron pixels for precise light capture, f//1.8 aperture, Optical Image Stabilisation (OIS) and superfast autofocus. The secondary camera of 13MP is for depth sensing and comes with f/2.2 aperture. At the front, this phone has 20MP camera with pixel binding feature that combines four pixels into one super pixel for capturing ultimate night-time selfies. This phone also boasts of Pro Camera UI for capturing Bothie by using front and rear cameras.

This phone has fingerprint sensor on the back and ofers connectivity options of 4G VoLTE, Wi-Fi 802.11ac,  Bluetooth 5.0, GPS/ A-GPS, FM radio and USB Type-C port.

On the desing front, this phone has unique two-tone design which is made of 6000-series aluminium frame with a dual anodising process having Diamond cut edges.