At IFA 2018, Huawei has launched Huawei Mate 20 Lite smartphone with two cameras at the front and two cameras at the back with Artificial Intelligence features. This phone is powered by Huawei’s own Kirin 710 octa-core processor with Mali-G51 1 GHz and combined with 4GB RAM and 64GB of internal storage which can be further extended upto 256GB via microSD card. This phone is packed with 3750mAh battery with fast charge. It supports a 6.3 inch Full HD+ Display (1080×2340 pixels, 409ppi) with an aspect ratio of 19.5:9. 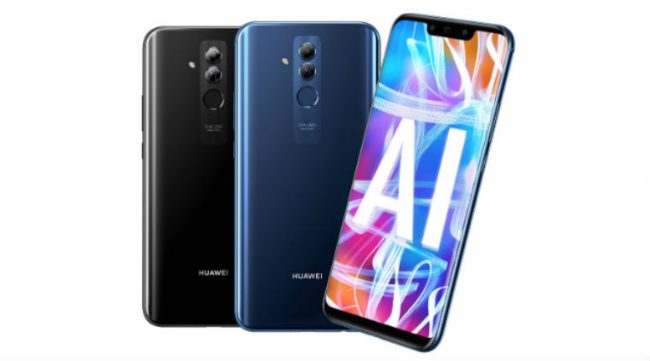 On the photographic front, the Mate 20 Lite is mounted with four cameras. At the rear, it has primary camera of 20MP and secondary camera of 2MP with f/1.8 aperture and PDAF. For selfies, it is armed with 24MP and 2MP cameras with f/2.0 aperture. The other features of camera set-up on this phone are its AI features such as scene detection which automatically adjusts the camera settings according to the background of the scenes being clicked for better results. This phone is claimed to recognise up to eight categories of different scenes. The other AI-supported features on this phone include AI Shopping Assistant, AI noise cancellation, AI smart gallery etc. This phone also boasts of 3D Qmoji which is Huawei’s own version of Animoji used by Apple on iPhone X.

This is Dual SIM phone and runs on Android 8.1 Oreo with EMUI 8.2 on top. For connectivity, it offers options of Dual-band Wi-Fi 802.11ac, 4G LTE, Bluetooth 4.2, NFC, USB Type-C port, GPS/ A-GPS, GLONASS, and 3.5mm audio jack. For security, it has face unlock and fingerprint sensor on the back.

This phone comes in in Black, Platinum Red, and Sapphire Blue colours and is priced British Pound Sterling 379 (roughly Rs. 35,000).

It was announced at the launch event that Huawei Mate 20 and Mate 20 Pro will be launched in London on October 16 with the recently announced Kirin 980 Processor.

TECNO Launches SPARK 6 Air which was launched in the month of July this year for Rs. 7999 can now be bought...
Read more